The Zen of Adventure: 4 Things I Learned From Monks While Trekking The Himalayas

One of the best experiences of my life was trekking through the Himalayan Mountains in Bhutan. It was a physical and mental challenge like I've never experienced, and I learned some life-changing lessons from a few monks hidden far from Western Civilization.

During the trek I came down with a weird case of altitude sickness, which put me on an alternate course than my 23 person group. The unexpected disappointment turned out to be a blessing in disguise, and led me to experience these 4 lessons:

The first day of our trek started with steep ascent up to the Tiger's Nest Monastery, which is perched on the side of a 3,000 foot cliff. I remember thinking, “So this is what they talk about in the movies when the guy goes to see the old wise monk in the Himalayas.”

We finally arrived to the monastery after what seemed like a never-ending climb in altitudes I've never experienced. It was an amazing scene and sense of accomplishment as we scaled the staircase to the entrance of the ancient temple.

Then it hit me – This experience wouldn't be nearly as inspiring had I not gone through hell to get there. There was just something cool about being on the opposite side of the world smack dab in the middle of the greatest mountain range on earth.

It was my toughest day of the trek, both mentally and physically. I was really bummed about getting altitude sickness, and my arms and legs were not feeling right…

As we set up camp, the only thing I could think about was passing out. Unfortunately, a member of the Bhutanese military made us move camp as soon as we were done setting up. Then, all of a sudden a couple dozen Bhutanese kids popped up and eagerly helped us carry our gear about a mile down the road closer to their school.

Within minutes I was laughing hysterically with the kids, many of whom had never seen a white guy. Then it hit me – The stress of having to leave my group and the pain of altitude sickness was gone. There I was making funny faces in a camera and joking with kids who couldn't speak a lick of English.

These kids lived on less than $1 per day and had no PlayStation or TV, but they were some of the happiest kids I've ever met. They were nice to each other, curious about us “outsiders”, and had a true appreciation for everything in their lives. 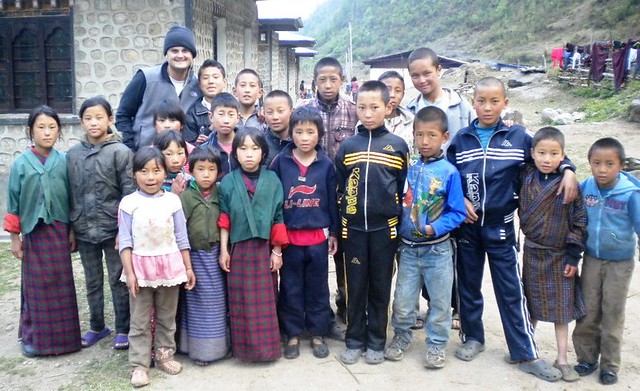 As someone who prides myself on “being extremely productive”, I used to find it difficult to sit quietly and do nothing. My wife constantly got on me about answering emails or being mentally preoccupied when we were out to eat. That was all until this…

Just as I thought the trip couldn't get any cooler, my guide told me his brother was doing a ceremony at a monk college “up the mountain”. A half day's hike later we arrived at the Tango University of Buddhist Studies. It was a special day because they were doing a ceremony lead by a young monk they believed was the reincarnation of the monk who founded the college hundreds of years ago.

Although I couldn't take pictures inside the ceremony, I'll try to describe it the best I can…

As we ascended a long staircase, I heard beating of drums and chanting. We entered a room with about 50 or 60 monks sitting cross-legged all chanting in unison. At the head of the big room sat a boy that couldn't have been older than 12. He lead the rest of the monks in a chant with the poise as if he had been doing it for centuries. It was like a scene out of “7 Years in Tibet”.

Shortly after the ceremony was over we were invited to have tea with a few of the monks. As I sat there sipping the tea, I realized I wasn't preoccupied with wondering what the markets were doing or what I needed to get done. I was fully engaged in conversation with more people who couldn't speak English. There were no deadlines, open trades, or real estate closings. It was me, my new friends, and the best tea I've ever had.

Without getting all “new-agey”, that lesson taught me we should slow down and focus on what's in front of us; especially if it's something we want to enjoy. There's always another trade, but time is a fleeting asset we can't afford to squander.

Now I'm not perfect at slowing down, but my wife said dinner dates have become much better…

Lesson 4 – Why Living Simple Doesn't Have To Mean Sacrificing Happiness

Towards the end of my trek we were invited to eat dinner with a family of 4 in their small one bedroom house. They all sleep and eat on the floor together in one room. I was told their only source of income was the vegetables they grew on their small plot of land.

When we arrived they made us feel like royalty. They prepared the most extravagant meal they could with the limited food they had, and insisted that we eat before them. It was their version of “busting out the fine wine”.

The most technologically advanced thing they owned was a TV from the 80's and a few VCH tapes (no cable or internet). They used newspaper for decoration and insulation, and at the center of the house was a wood burning stove.

I appreciated that meal more than any top-tier restaurant. It taught me that the intrinsic value we place on luxury and comfort is manufactured by our minds and expectations. Again, without sounding like a hippie, these wonderful Bhutanese people taught me the real meaning of happiness…

I guess that's why the King of Bhutan focuses on GNH (Gross National Happiness) over GDP (Gross Domestic Product).

He made and lost $5 Million… Twice!

https://www.youtube.com/watch?v=K-5z5u1U0xY I want to tell you a story of one of my students that made and lost about 5 million twice… And give you a few really key lessons that can be really valuable to you if you're a: Trader Investor Entrepreneur Anyone trying to...

12 years ago I went to jiu-jitsu religiously 5 times a week for a year. It was an incredible experience. I got in the best shape of my life... And my testosterone was through the roof! But when I moved to Austin, I became "busy" chasing money and never sought out...