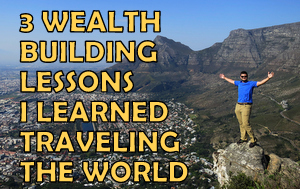 We circumnavigated the globe and visited over 86 awe-inspiring locations, all while building wealth through trading the financial markets online. 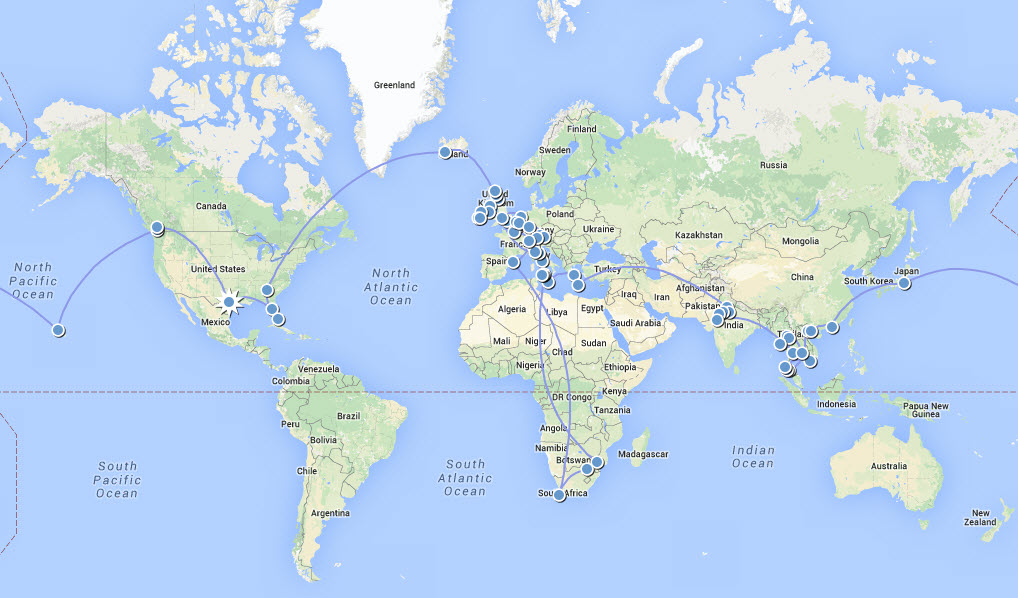 Epic Journey Route Around The World

My proudest accomplishment during our trip was being able to teach thousands of people about trading and investing. Our trading education company, Daily Trading Profits, exploded with new members as we traveled around the world.

We captured hundreds of hours of video footage and thousands of pictures from our adventures. Thanks to our very skilled video editor we've been able to release weekly “Epic Journey” video episodes. Make sure to subscribe to my YouTube channel so you don't miss any of the new videos that are still being released!

Here's the current playlist with all the published Epic Journey episodes:

During our journey we experienced things that excited us, terrified us, and inspired us.

Despite what the talking heads and doom-and-gloomers on TV say, the world is exploding with ways to build wealth.

Thanks to technology, digital currencies, and a new generation of entrepreneurs, people from all around the world are understanding it's possible to choose a life of wealth over poverty.

From Iceland to South Africa to Hong Kong, most people we met had a positive outlook on their financial future. Nearly everyone we talked to was passionate about building a business, investing in a new technology, or excited about something they were working on.

Here's a few examples of people building wealth around the world…

I brainstormed with tech startup CEO's in Chiang Mai, Thailand…

And we felt the rush of innovation and capital bursting through the doors of Myanmar, a country that had previously been closed off to the world for decades.

Everywhere we turned people were innovating, building wealth, and taking control of their financial destiny.

This is a pretty hot debate among startups and entrepreneurs right now. Some people will insist the best place to build a company is in New York City, San Francisco, or up-and-coming cities like Austin, Texas.

As much as I love having a “home base” in a city like Austin, it's no longer neccessary to live in a major U.S. city to build wealth or kick off a startup.

Sure, there some major benefits to working in a huge American city, but there are also some significant drawbacks.

First off, it's becoming increasingly expensive to live in America's biggest cities. For example, the average two bedroom apartment in San Francisco rents for $4,268. That's way beyond the reach for most people building a business or aggressively growing their wealth.

Many companies are starting to move their employees from expensive commercial real estate offices to allowing them to work from home.

Wall Street trading firms are moving their traders from downtown Manhattan to cheaper offices in New Jersey. Tech startups are working virtually from places like Thailand and South Africa.

The beautiful thing about day trading and working online is that you can do it from anywhere with a high-speed internet connection. Here were some of our favorite places to “work” across the world:

This is one amazing view to wake up to every day in #Africa! Can't wait for all the #epic #adventures that we're about to jump into over the next few weeks! I'm also holding a trader meetup for all my South African dunn.ly/pro-trader students! #epicjourney

INDIA – Luxury suite across the street from the Taj Mahal

We woke up to see the sunrise at the Taj Mahal. Totally worth it! #epicjourney #nofilter #worldtravel A photo posted by Chris Dunn (@chrisdunntv) on Oct 29, 2014 at 10:08pm PDT

Celebrating a HUGE day in the stock market, and our last day in Greece before flying to India with a €2 bottle of wine! #epicjourney

3. Anyone Can Start Building Wealth If They Develop This Simple Habit

People from all corners of the globe now have the ability to learn about anything instantly. The internet and proliferation of free information makes it easy for people of all social classes to compete with people that have more money, formal education, and influence.

So the simple habit that anyone can develop is… resourcefulness.

There's no longer any excuse for not being knowledgeable about: personal finance, investing, trading, economics, or anything else that can better your financial situation. From Kindle books to YouTube videos to online training courses, all you need is a smart phone and you can get an MBA education for free.

My high school teachers used to say, “You have to learn how to do algebra, because you won't always have a calculator with you.” Well, now a decade later and virtually everybody always has a calculator on their phone. Education is moving from a “memorize and regurgitate” model to a “problem solving and critical thinking” mode of learning.

The world doesn't need more people who can procrastinate and cram study for a test last minute. What we need is people that can seek out solutions to complicated problems. After all, that's what the best entrepreneurs, investors, and traders all do.

I failed almost every math class since the 5th grade, yet I trade the financial markets. I barely passed high school because I was busy building my first business when I society told me I should have been learning at the slowest person's pace.

My advice is to forget conventional wisdom. Buck the system. Drive forward with your own way.

For example, learn the right way to use Google to its full potential. Pick a subject and see how quickly you can master it by seeking out answers.

Do this and watch your wealth, quality of life, and influence grow to heights you never imagined.

The Most Important Thing You’ll Ever Do