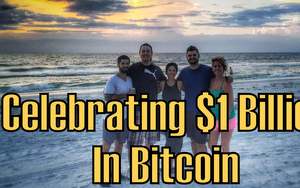 Hey guys! So, I'm here on St. Pete beach Florida. I just flew the team down for a quick trip where we can all work together on the beach. And the reason why we came down here is because we’re getting ready to launch the new show and podcast called “Pathways to Wealth” which is all about bringing you new and time-tested ways to build wealth, earn more income, and have more time-freedom.

Today is actually a really big day because Bitcoin just crossed a billion dollars invested in bitcoin companies. This is a huge deal because just a couple of years ago, I remember my friends on Wall Street were all laughing at me when I was talking to them about the long term prospects of bitcoin.

And today, those same people are calling me on a regular basis saying things like, “Chris, my firm is now completely all in on blockchain.”

They don’t even want to use the word bitcoin (because of the negative stigma around Silk Road), but they’re all-in on bitcoin and say things like, “I've been told that I have to learn everything I can about Bitcoin this time because we don’t want to miss out.”

And I can't help but just laugh because it’s just a couple of years ago that a lot of institutional people on Wall Street were just kind of laughing bitcoin off and now it’s one of the fastest growing ecosystems in the world, so that’s just huge.

I'm going to actually walk you guys over the house here in a second and we’ll look at some charts. Recently, we had just a really beautiful breakout trade. Bitcoin is up over 35% or 40% this month. It’s just an amazing run and we’ll talk about why that is but let’s just go ahead and head over there.

Chris: I'm going to show you the team guys, so this is like our little “hackathon,” got the crew up in here.

Chris: So Nikki traded today. How did you today? What did you do?

Nikki: I traded an APDN. This was a balance play actually.

Chris: How did you today?

Chris: How much did you make?

Nikki: I made about a thousand pay on this balance.

Chris: Awesome. And then over here, we got Tony, our operations guy.

Chris: And then, this is my little battle station across from Kevin, our programmer extraordinaire digging into some deep code.

Kevin: What’s up? What’s going on?

So anyway guys, I just wanted to show you today on bitcoin this thing just went absolutely nuts.

This is a daily chart and if I zoom out here, you can see all the way back to the beginning of the year.

This was the low of the year and then you can see now if I zoom in, bitcoin has gone absolutely nuts. It’s actually up, just crossed 50% over the past 30 days and today was just a huge breakout. It’s up about 10% today, so I sent an alert where I started buying through here in the 240s and you can see, I mean, this thing has just gone absolutely to the moon.

I’m actually out of my short-term trade but I've been accumulating and buying bitcoin for long-term holds down in the 220s as it has been kind of basing all year.

I want to show you the CNN article that just came out, “Record $ 1 billion dollars invested in bitcoin firms so far” and most of that was over the past 12-18 months or so.

This is just a huge win for digital currencies because like I said guys, a lot of institutional people, who were riding it off over the past several years are now going, “Okay well, bitcoin is not going anywhere. We need to learn and really get in on this.”

I just think it’s just a huge win and I'm excited. I hope you guys are too. I've got the new show and the new podcast coming out very shortly, so be on the lookout for that. It’s called “Pathways to Wealth” and that’ll be on iTunes, that’ll be on Stitcher, and obviously we’re on the Chris Dunn TV YouTube channel.

Look forward to that guys. Thanks for all the support. Thanks for subscribing and liking up these videos and sharing with your friends. Together, we’re going to spread this message of financial freedom and hopefully educate more and more people on bitcoin and digital currency. Thank you guys. I’ll talk to you in the next video. See ya.

How To Trade & Invest In Bitcoin

Introducing The Pathways To Wealth Podcast!
Scroll to top