Ever since our first Great White Shark Diving trip in Australia, I've been absolutely OBSESSED with sharks and scuba diving.  And I think great whites are beautiful animals with an unwarranted bad reputation.

I heard that South Africa was one of the best places on the planet to see great whites jump out of the water, so I jumped at the opportunity when I got an invitation from Morne at Shark Explorers.  After all, Morne is one of the world's leading experts on great whites, and has worked on documentaries with CNN, National Geographic, BBC, Animal Planet, and much more.

This shark experience starts before sunrise, and consists of 3 awesome experiences.

First up is Natural Seal Predation. This starts right before sunrise when seals leave the safety of Seal Island in search of fish.  We searched for seals swimming back to the island, because there was usually a great white hot on their tails.  Typically we'd see just a small black shadow popping out of the water, which was the seal hauling ass back to the island.  It was pretty incredible how good the tracker was at spotting seals in the water, especially since the sun was still barely breaking the horizon.

With my camera in hand, I was ready for some shark action!  It took a lot of patience, and a quick eye, because you never knew exactly where a shark attack would happen.  Sometimes we'd spot a breach out of the corner of our eye, and other times it happened right in front of us. 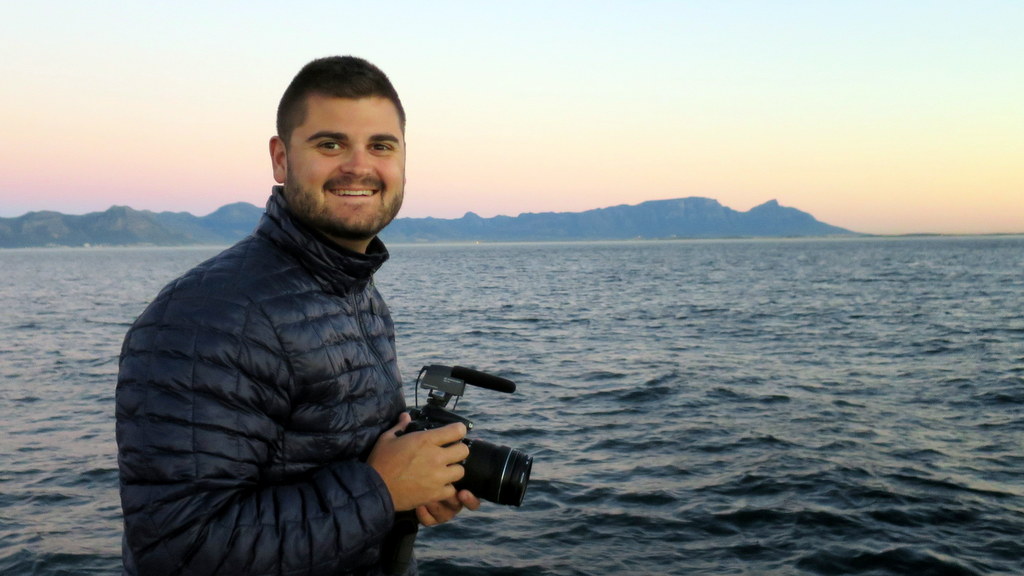 With the seals close to the surface of the water, the great whites will explode up from beneath, sometimes coming completely out of the water.  On our trip we saw half a dozen natural hits, with two or three being successful kills.

Check out this pics from the Shark Explorers Instagram page:

Next the crew started to attract the great whites with fake bait. After most of the seals make it back to the island after breakfast, the crew pulled out “Frank” who's a fade rubber cut out of a seal. He's towed about 50 feet behind the boat, with cameras locked in on him hoping to get a shot of a shark breaching the water.  In the picture below you'll notice some guys with their camera pointed in the same direction.  They were filming a shark documentary.

Unfortunately for me, the sharks outsmarted us that day, and we didn't get any breaches on Frank, but sometimes Shark Explorers will get 5 or 6 full breaches in a single day!

Shark Cage Diving – This was probably my absolute favorite part of the trip. The crew chums the water with fish guts and ties tuna heads to a rope, which they throw overboard to attract the great whites. Then, they drop a cage off the side of the boat. 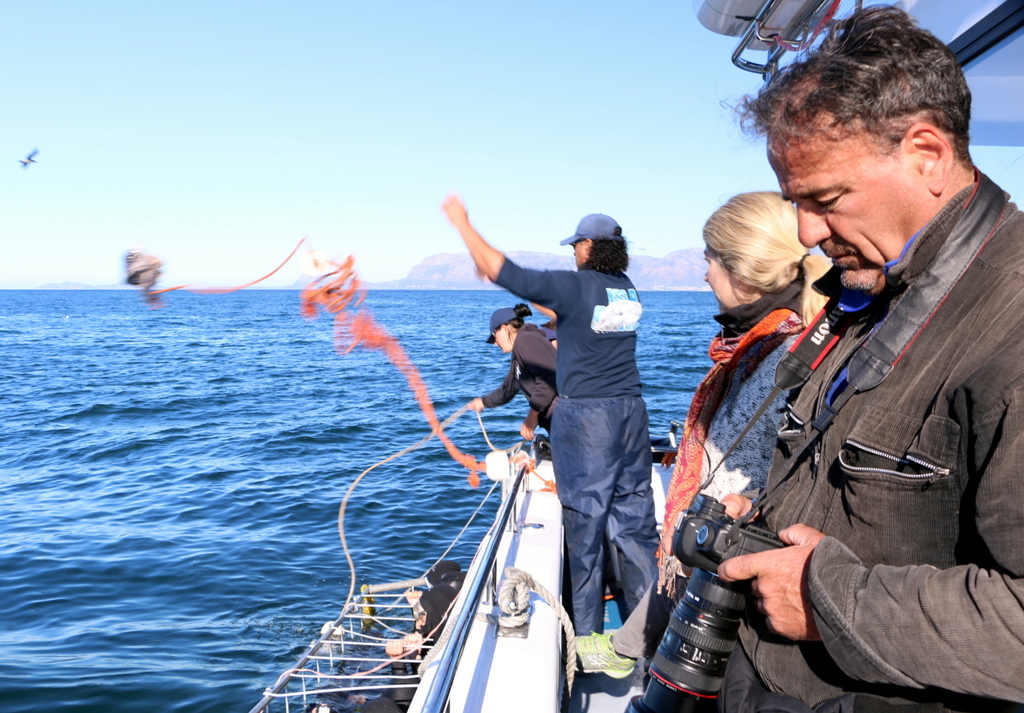 I was the first one in the cage, and immediately saw a massive great white just a few meters in front of me. It was breathtaking!  Even though the visibility wasn't great, I still had a bunch of close encounters under water.  One time I thought he was gonna stick his head into the cage to “say hello”. 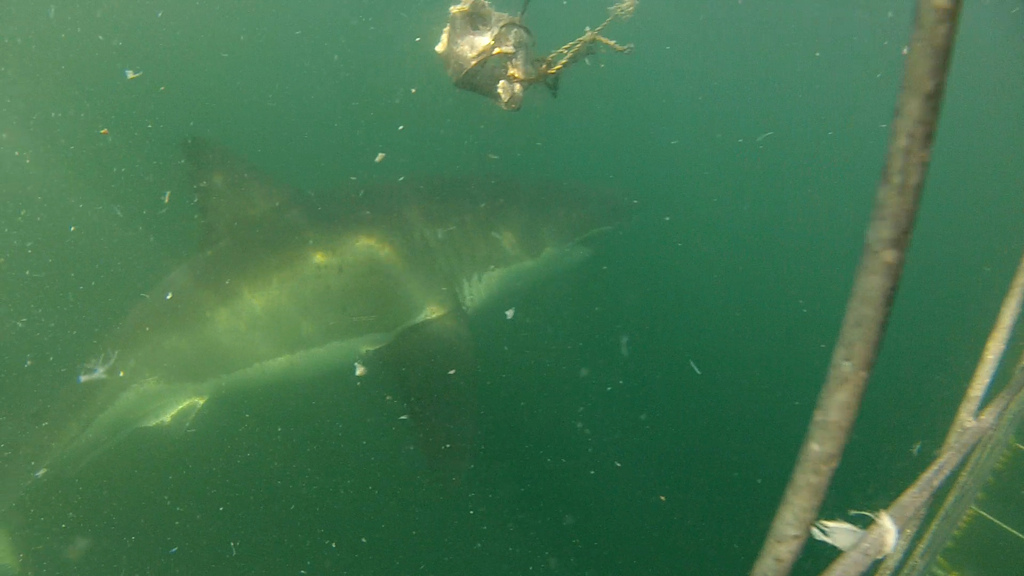 At the end of the day, it was actually a happy ending for the seals.  They played in the safety of the island as we drove around.  It actually felt like they were bidding us farewell as they jumped through the waves, and turned upside down in the water for us.

One of the crew said there was over 10,000 seal on this island.  It's incredible to see the range of size and activity!  Some looked like they've had way too much to eat, where others look like they were born yesterday! 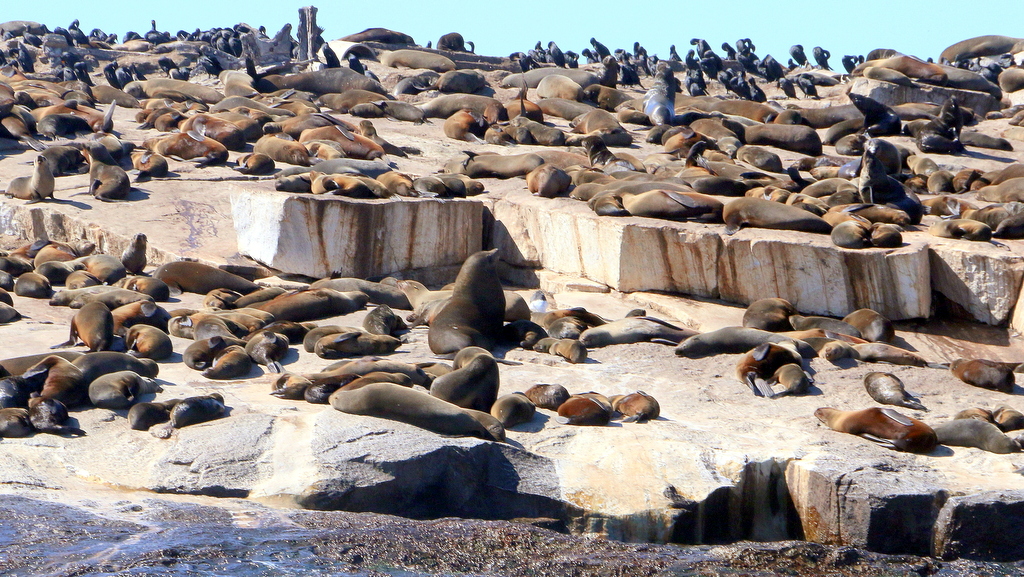 Some people are terrified of the ocean, especially sharks.  I would encourage ANYONE to challenge that fear and have a go at great white shark diving.  It's incredibly safe, and will change your life forever.  Contact Shark Explorers if you want the trip of a lifetime!