Looking Back Over 5 Years Of Bitcoin Trading & Investing 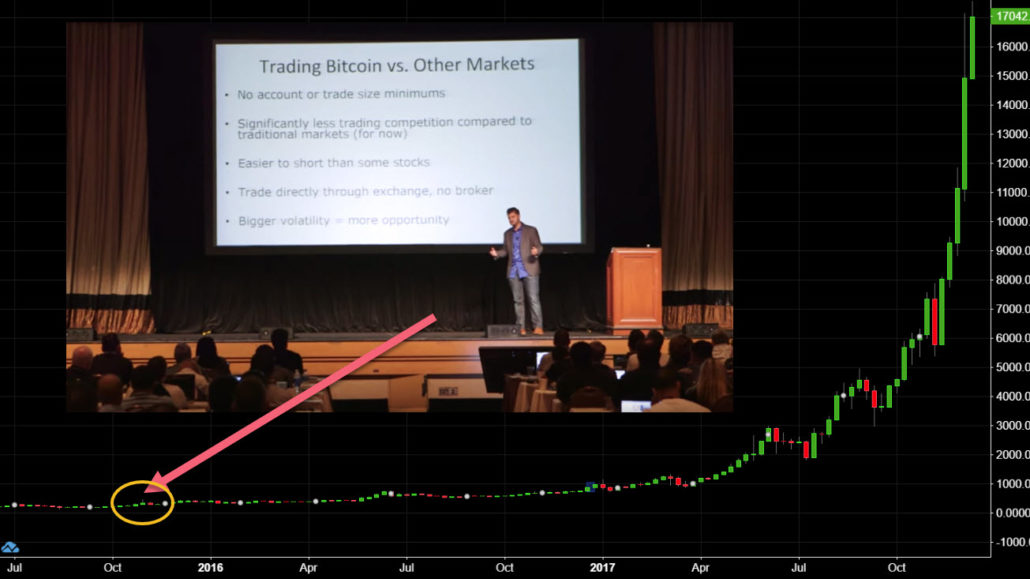 It was October 2015 and I was speaking at an event with over 500 stock market traders and investors.

My presentation was all about Bitcoin, and how it was about to be the next big thing and the best market to trade and invest in…

Just two years earlier I made the decision to go “all in” on Bitcoin and shift my main focus away from day trading the highly manipulated stock market to trade and invest in decentralized cryptocurrencies.

Unfortunately, many of the attendees thought I was crazy.

They mocked the idea of a cryptocurrency becoming a legitimate investment or trading vehicle.

They thought it was better to chase penny stock pump and dumps or spend 8+ hours a day trying to beat algorithms at day trading.

I was sick of seeing people lose money due to historic low volatility in the stock market that was overrun with high-frequency algorithms (see “Flash  Boys” for the story about how the stock market is rigged).

Within a month of my talk, Bitcoin doubled to $500.

Even then most people still weren't believers, so I sent this Tweet around this time last year when Bitcoin was around $800…

To everyone who trashed bitcoin as a failure, now is the time to reevaluate your opinions so you don't end up on the wrong side of history.

And speculation is going wild just like when I warned we were in a bubble in November of 2013.

Today, everyone is talking about bitcoin…

Financial “experts” are all jumping on the crypto bandwagon. CNBC is talking about bitcoin’s meteoric rise around the clock.

And some “gurus” that turned their nose up at Bitcoin at that event have suddenly become overnight experts on the topic and even launched their own crypto trading courses and trading rooms.

I get dozens of emails every day asking the same question…

“Chris, is it too late to buy bitcoin?”

People around the world are waking up…

They understand that bitcoin is shaking up the old-school financial system.

They're learning how their government has been destroying the value of their “fiat currency” like the U.S. dollar.

That’s where bitcoin comes in…

You see, people TRUST Bitcoin because it’s a fully-transparent, math-based currency. No central banker can destroy its value by suddenly deciding to print more Bitcoins.

And most importantly, citizens no longer need permission from banks or governments to send money around the world.

That’s right, no more red tape, expensive wire transfer fees, or jumping through hoops just so you can decide what to do with YOUR OWN money.

Now we can send money anywhere, instantly, virtually for free.

For the first time in human history, we have TRUE currency competition where the most useful form of money holds the most value.

This is the biggest financial innovation of the century. Bitcoin gives the power back to the people.

But people who chase trends and invest based on FOMO (fear of missing out) will lose money.

That's how the market works…

It rewards people who see the vision and take risks early and punishes emotional investors that chase hype.

It’s all about knowing WHEN to buy and sell.

They don't just go straight up…

And even though I'm bullish long-term on Bitcoin and other cryptocurrencies,  I'm prepared if this current speculative bubble pops in the short-term.

Since Bitcoin's inception, we've seen a half dozen big boom and bust cycles…

Why should this time be any different?

The problem with some crypto investors is they never want to think about the possibility that Bitcoin's price could crash.

But here's something to keep in mind…

And many emotional investors typically panic sell at the bottom of these “crashes”.

But pullbacks in the price of a market are actually HEALTHY for its long-term growth.

Here's a video demonstrating that point…

For the past 5 years, I’ve been helping people from around the world learn how to profit from cryptocurrencies.

Like my students from Venezuela who saw the writing on the wall and moved all of their family's wealth out of Bolivars into Bitcoin a few years ago, and instead of literally starving today they can feed their entire community.

And reformed day traders (like me) who stopped wasting time chasing peanuts to focus on finding the big home run trades and investments.

The banks and incumbents like Jamie Dimon see the writing on the wall. They know their power is quickly diminishing, which is why they're trashing cryptocurrencies any chance they get.

Some governments will ban cryptocurrencies…

And some will embrace them.

Governments that ban cryptocurrencies may feel like they have more control in the short-term, but all they're doing is stealing prosperity from their citizens in the long-term.

In the U.S. we're seeing Wall Street chase the opportunity with cryptocurrencies…

They're launching futures this month, which is going to open up more opportunities AND challenges next year.

ICO's have raised billions of dollars of investment capital this year, and Silicon Valley is understanding that the new token sale model is much better than the old-school venture capital model.

As we come to the end of 2017, I just want to say congratulations to all the investors, traders, and entrepreneurs that have seen the vision despite all the naysayers.

It's been an incredible past few years, and I'm excited about the future of crypto-assets.

If you're new to Bitcoin, check out my free Bitcoin Basics Course where you'll learn how to get started the right way.