I'm running a couple weeks late on my 2015 Bitcoin predictions post because I was extremely busy traveling through Hong Kong, Tokyo, and Hawaii this past month.

Anyway, my goal with this post is to give you some actionable insight into what I think is going to happen in our digital currency community this year…

First off, Bitcoin's price has been on a steady decline since the “China Bubble of 2013”. This caught many people off guard and turned a lot of people away from Bitcoin. But as you can see from this post on November 21st, 2013 I was pleading with people not to invest in Bitcoin at all-time-highs.

While a lot of “buy and hope investors” have lost a lot of money, we've done really well actually shorting the price of Bitcoin. In fact, I've publicly posted over dozen trades last year, many of them on the short side.

Over the past year I've always said falling prices are actually HEALTHY for Bitcoin. Why? Because price discovery is a huge part of the adoption process with a new asset. And over-valued prices are nearly always unsustainable.

The most important thing about Bitcoin's viability is:

1) How many people actually use it in their day-to-day lives,

2) How much innovative technology makes it easier to use and trust Bitcoin.

A lot of people want me to make a prediction about where Bitcoin's price will be at the end of 2015. Sorry to disappoint, but I have absolutely no clue. I'm a TRADER, not a long-term speculator, which is exactly why I've been accurate on over 90% of my Bitcoin trades.

I suggest people stop trying to guess where Bitcoin's price will be months out, and start using a disciplined strategy for profiting off Bitcoin no matter if price rises or falls.

For example, instead of just emotionally buying at any price, I virtually picked the most recent bottom in Bitcoin's price. I issued a buy alert for my Bitcoin Trading Academy students at $188. Later I issued another alert for a buy at $200, and took profit all the way up to $304 for a 62% gain!

Just closed more of my #bitcoin long at $304. That makes for a 62% gain. Second biggest bitcoin trade ever!

Here's a few of my student traders who nailed this setup… 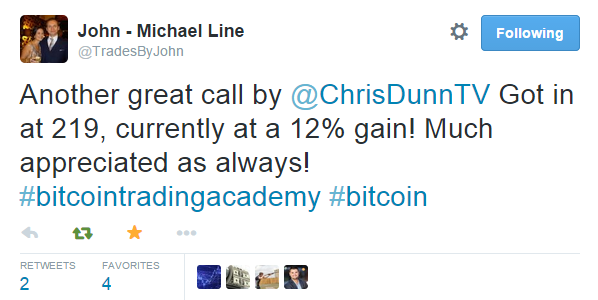 We will continue to see big volatility in the price of Bitcoin driven by fear and greed. This will give traders an incredible opportunity to profit no matter if price goes up or down.

Just like the past two years, many big moves in Bitcoin will be pushed by positive or negative news.  I think a lot of early adapter bag holders have sold, which leaves a lot of room for new investors to step in as demand for Bitcoin's price.  I doubt we'll see $1,000 per coin anytime soon, but I expect it to hold value well throughout the year unless there's a massive unforeseen issue with the protocol.

Bitcoin has now moved from the early adopters phase. We're now starting to see BIG money being raised for digital currency. For example, Coinbase just raised over $70M in the past week, and launched the first fully regulated, licensed, and insured trading exchange! This is the biggest news to hit Bitcoin since its inception.

This year many exchanges will go bust or lose market share to a select few exchanges. The cream will rise to the top. The best technology and execution will win because it will attract the best traders. Full financial transparency will be demanded so we don't have another Mt. Gox debacle.

This is a huge one – Over 90% of alt coins will lose 80% or more of their market cap value. Just like the cream of the exchanges will rise to the top, only a few alt coins will be able to maintain their value. My hope is there will be less pump and dump scams like AuroraCoin and PayCoin.

The digital currency space could raise at least $1 billion dollars in the next 12 months. That's right… the near future will attract bigger VC's, angels, and institutional investors.

I will continue to work with my group of BTA traders and trade for big moves of 15%-30%.  We also have some really exciting developments in the works for our traders.  We'll look back on this year a decade from now as one of the most pivotal times for digital currencies.