Should You Go To College? (And 5 Alternatives) - Chris Dunn - Building Wealth and Living Well

In this episode, I’m answering the challenging question…

Should you go to college?

This is one of the biggest decisions many people will make in their lives. And many people end up following a path out of obligation or blindly chasing money.

I feel uniquely qualified to talk about this since I explored many options and took an alternative path to finding my own success.

In fact, I'm so passionate about this topic that I created this free course – 5 Skills To Help You Earn $100,000 This Year.

Despite barely graduating high school and dropping out of community college my first year, I’m a huge advocate for education.

I got a front-row view of the traditional path…

I hustled my way into a corporate job that required a business degree, build a big house, and had the nice cars… All without going to college.

And you know what?

Even though I was making good money, it left me unfulfilled.

Thankfully, I was able to “test” out that role in my late teens and figure out that path wasn’t for me.

I would have felt terrible had I wasted 4+ years in college only to find out I was on a path of being unfulfilled.

There are several myths about college…

You need a college degree to get a good job – With a little hustle and determination, you don’t need the stamp of approval from a university to get hired for a high-paying role.

You need college to build a network – While you can meet a lot of smart people in school, there are many alternative (and quicker) ways to build a powerful circle of influence.

College grads make more money – There are studies that show college educated people from our parents’ generation made more money than people with only a high school degree.

The problem is that study assumes college was the reason that group of people made more money. Correlation does not mean that college was the cause of higher average income.

The only way to know for sure is to take a set of equally intelligent and driven people, send half of them to college, and put half of them on an alternative path.

Just look at some of the world’s most successful people… Mark Zuckerberg, Steve Jobs, Bill Gates, and Richard Branson.

Then I look at my own network and realize that a large majority of millionaires I know don’t have a college degree.

The cost of a college education has risen faster than every other major expense by a wide margin including healthcare, housing, and inflation.

That’s well over $100,000 for a college education, not taking into consideration the opportunity costs. 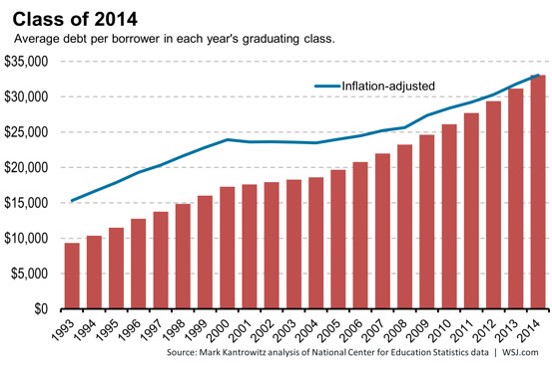 Unfortunately, a lot of kids going into college aren’t taught the dangers of debt, and end up suffering for decades because they were sold a narrative that school debt is “good debt”.

This is where things start to get really interesting…

Only ⅓ of students graduate in 4 years.

Think about that. The odds of graduating after 6 years of school is still only 50%.

And 48% of college grads end up getting a job that didn’t require a college degree in the first place!

Facts About People And Life

To figure out if you should go to college, we need to look objectively at some facts about people and life…

1) Most people don’t know what they want to do with their lives when they graduate high school.

2) Some people have families that want them to follow in their parent’s footsteps.

3) Some people feel a calling towards passions like entrepreneurship, working with kids, or helping animals.

4) A scary majority of adults are stuck in jobs they feel underpaid and unfulfilled.

5) Some people feel like the only way to “move up” in life is to acquire a college degree.

So, with all those variables and different social pressures, there’s no single right path for everybody.

In order to find out the best path for you, we need to answer two questions…

1) Do you know, without question, what you want to do for a career, and if that career requires a college degree?

2) Do you have the cost of college covered, or do you need to go into debt to pay for school?

If the answer is yes to both of those questions, then go to college.

If the answer is no or unsure to either of those questions, then consider one of the following alternatives…

Hopefully by now we’re in agreement that college isn’t right for everybody, and it’s possible to succeed in life without a college degree.

The following alternatives to college are really exciting, and should not be viewed as lesser pathways to success.

We're now living in a “skill based economy”. We no longer need fancy accolades or a piece of paper to prove you’re smart.

Instead, we can develop skills that don’t rely on a single employer, industry, or business model.

And I recently created this free course showing you 5 skills to make $100,000 this year from scratch.

For example, I tell my young cousins to learn coding. I think computer programming is just as valuable a skill as understanding the English language and mathematics.

Never want to worry about being unemployed again? Learn the skill of sales.

If you understand consultative sales, you’ll never go hungry or worry about finding a job because high-quality sales people are always in high demand.

Some other valuable skills include: real estate, investing, marketing, financial trading, and writing.

2) Find a mentor and get an apprenticeship

The reason I was able to get a high-paying job right out of high school was because I had a mentor early in life.

I learned about real estate and finance while my friends were worrying about the latest high school drama.

Seek out people that have done what you want to do. Add value to their lives first. Don’t be a leech.

If I could go back and change one thing, it would be this…

Instead of building my first house when I was 20, I would have sold all my stuff and went to Asia and South America for at least a year.

You’ll learn so much about people, culture, and business just by interacting with people around the world. A classroom education has nothing on real-life experiences.

As we talked about in Episode 04  of Pathways To Wealth, there are dozens of ways to earn money as a freelancer online from anywhere in the world.

Want to be an entrepreneur? Don’t waste time getting a business administration degree – Go start a damn business!

Just do it and learn. You’ll learn more in 1 year of building a business than 6 years of getting drunk at your local state university.

Curious about an industry? Suck up your pride and go work at the bottom of the totem pole to figure out if you even like the industry.

You might end up hating the industry and saving yourself $100,000+ by skipping the degree.

This will give you time to pivot into a different area or move forward with the confidence that you’re in the right place.

Ok, hopefully by now you have a plan of action.

No matter what you decide, focus on these two things:

1) Debt sucks! It’s poison. Don’t go in huge debt to get an education.

I can’t stress that enough. Student loans aren’t free money. That crap follows you around for life.

In fact, U.S. Marshalls just arrested a man for not paying off a student loan from 1987!

2) No matter if you go to college or not, always focus on developing transferable skills.

Start learning valuable skills in my first course, 5 skills to help you earn $100k this year.

Think like a hockey player – Where’s the puck going?

In other words, what are the skills that are going to be valuable in the near future?

I’ll leave you with this quote…