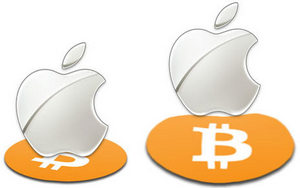 The main premise of the argument is that bitcoin is too difficult and insecure for the average user and that easier payment options will become the dominant player.

The article was written soon after bitcoin's January 2015 price crash down to $166. It presents a very biased perspective on why bitcoin is a failure and how Apple Pay will succeed.

There's a very good reason why the article is biased, the author is Ross Gerber, the CEO of Gerber Kawasaki, which owns $6 million worth of Apple shares. Now that alone is no reason to discredit the content of an article, after all I am personally invested in bitcoin so even my opinion is biased.

Before the announcement of their new mobile payment application, Apple banned all bitcoin wallets from their App store. Given this recent history, it's not surprising that some Apple investors would slander Bitcoin.

Regardless of Ross Gerber's invested interest in Apple, he does bring up a few good points. The main one being that Bitcoin isn't very consumer friendly.

So will Apple Pay put the nail in Bitcoin's coffin? Let's take a comparative look at these payment methods and determine if there is any weight behind this claim.

Apple Pay is an application that lets you easily pay for things through your credit card or bank account by using an iphone. Apple Pay is late to the game of mobile payments and one of several competing payment applications.

I must admit, Apple Pay is really easy to use… IF you have an Iphone, and IF the merchant accepts it.

I watched my wife use it at Whole Foods. It took less than 5 seconds to complete the transaction from the time she pulled her phone out of her pocket.

Bitcoin is a decentralized network that has a value system built into the protocol. This value system acts like a currency and is used to help keep the network secure by incentivizing miners to confirm transactions.

Where Apple Pay is just an easier way to swipe your credit card, Bitcoin is a unique and original invention that can change finance on many levels.

Although Bitcoin has the ability to make mobile payments, this is only one feature among many…

Comparing Bitcoin to Apple Pay is like comparing a web browser application to the internet itself. A more accurate comparison would be that of Bitcoin to the underlying banking network that Apple Pay uses to facilitate transactions. In other words, Apple Pay is comparative to a mobile bitcoin wallet and not the actual protocol itself.

Can Apple Pay and Bitcoin Co-exist?

Not only are these two technologies different, it's also entirely possible to one day integrate bitcoin into the Apple Pay software.

It's true, at the moment Bitcoin isn't the most user friendly technology. It's still like the internet in the lat 90's. This is where Bitcoin startups really need to step up their game!

For Bitcoin to truly achieve mass adoption, it's going to need to become just as easy as swiping Apple Pay.

Mobile payment apps using traditional fiat currencies will most likely catch on faster for the average consumer. If Bitcoin was only a mobile payment application it would definitely be in trouble but it can do so much more than just send payments through a phone.

We've seen Wall Street starting to invest and adopt Bitcoin's technology. For example, this week it was announced that NASDAQ is now using Bitcoin's blockchain technology for its IPO trading arm.

Although Apple Pay is easy to use, it's not universally compatible and accessible. Apple products generally don't interact well with non Apple devices and iphones are usually the most expensive smart phones on the market. Because Apple Pay uses legacy banking channels, it also excludes over 1 billion unbanked people from the equation.

Bitcoin has many functions but has the potential to serve the world's unbanked. There are already companies such as Bitpesa that are using Bitcoin to send affordable remittances in Africa.

The world's unbanked face financial discrimination simply due to the geographical region of the world in which they were born. These are arbitrary financial restrictions placed on people by centralized economic policies.

The most important value that Bitcoin brings to the table is that it's decentralized and can circumvent economic restrictions. It's a peer-to-peer network placing the power of money back into the hands of individuals.

So even if half the world's population start to use Apple Pay tomorrow, there will still be an evolving market for Bitcoin.

Go-getters: Why They Win In Life

The Most Important Thing You’ll Ever Do
Scroll to top